Goddess of Underworld and Death, Mistress of Death, Daughter of Loki, Queen of Niflheim

Hel, also known as Hela, is Loki's daughter and sister to the wolf Fenrir and serpent Jormungandr and presides in the realm with the same name (the underworld).

She was appointed by Odin to be the ruler of Niflheim. Warriors who fell in combat did not become her subjects but went instead to the hall called Valhalla to live with Odin.

In this realm Hel has grand mansions with extremely high walls and immense gates, a hall called Eljudner, a dish called "Hunger," a knife called "Famine," the servant Ganglati (Old Norse "lazy walker"), the serving-maid Ganglot (also "lazy walker"), the entrance threshold "Stumbling-block," the bed "Sick-bed," and the curtains "Gleaming-bale." High describes Hel as "half black and half flesh-colored," adding that this makes her easily recognizable, and furthermore that Hel is "rather downcast and fierce-looking."

She is also said to be the only one capable of controlling the dragon Nidhoggr. Not only was Hel the queen of Helheim but she was also the queen of greed, cruelty, and harshness

According to some materials, Hel Death Goddess provided many dead warriors for Loki’s army during the Ragnarok event. Her army teamed up with the Jotun from Jotunheim came to the stronghold Asgard to wage a bloody war.

Hel is said to appear as a fearsome woman whose appearance could scare the lookers off. Hel appears as a thin woman, beautiful on one side but like a rotting zombie on the other. For this horrid visage she is outcast among the gods, but admired by the dead.

Her appearance is described as half-black and half-flesh colored, and also has a gloomy, down-cast appearance. Hel's visage is frightening for mortals to view. When she reveals the undead half of her face, it inflicts fear in even the bravest of mortals.

Sometimes, Hel was depicted alongside with a black hound Garm who actually guarded the gate of Helheim and the mortal enemy of Tyr in Ragnarok.

It is said that once the gods found that these three children are being brought up in the land of Jötunheimr, and when the gods "traced prophecies that from these siblings great mischief and disaster would arise for them" then the gods expected a lot of trouble from the three children, partially due to the nature of the mother of the children, yet worse so due to the nature of their father.

After this discovery, Odin sent the gods to gather the children and bring them to him. Upon their arrival, Odin threw Jörmungandr into "that deep sea that lies round all lands," Odin threw Hel into Niflheim, and bestowed upon her authority over nine worlds, in that she must "administer board and lodging to those sent to her, and that is those who die of sickness or old age."

After the death of Baldr at the hands of Loki, the goddess Frigg asks who among the Aesir will earn "all her love and favor" by riding to Hel, the location, to try to find Baldr, and offer Hel herself a ransom. The god Hermodr volunteers and sets off upon the eight-legged horse Sleipnir to Hel. Hermodr arrives in Hel's hall, finds his brother Baldr there, and stays the night. The next morning, Hermodr begs Hel to allow Baldr to ride home with him, and tells her about the great weeping the Aesir have done upon Baldr's death.  Hel says the love people have for Baldr that Hermodr has claimed must be tested. This test being that if all the things in this world, living or dead, mourn for Baldrr then he will return to the land of the living. If one refuses, then he will remain in her domain. 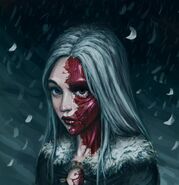 Hel while she was young

Add a photo to this gallery
Retrieved from "https://the-demonic-paradise.fandom.com/wiki/Hel?oldid=23269"
Community content is available under CC-BY-SA unless otherwise noted.