The Demonic Paradise Wiki
Register
Don't have an account?
Sign In
Advertisement
in: Beings, Divine, Deity,
and 13 more

King of the Titans, Father of the Gods, Nefarious Usurper, King Cannibal, Crooked One, Devourer of Kin

Cronus, also known as Kronos, Chronos or Saturn, was the leader and youngest of the first generation of Titans, the divine descendants of Ouranos, the sky, and Gaia, the earth. He overthrew his father and ruled during the mythological Golden Age, until he was overthrown by his own son Zeus and imprisoned in Tartarus. He was known as the Titan of time, harvest and evil.

Cronus was born of Gaia and Ouranos and was part of the first generations of Titans. As he grew Cronus envied the power of his father, the ruler of the universe, Ouranos. Ouranos drew the enmity of Cronus's mother, Gaia, when he imprisoned the gigantic children of Gaia, the hundred-handed Hecatonchires and one-eyed Cyclopes, in Tartarus, so that they would not see the light. Gaia created a great divine sickle which would later on be known as Cronus' sickle and gathered together Cronus and his brothers to persuade them to castrate Ouranos.

Castration of the Sky

Only Cronus was willing to do the deed, so Gaia gave him the sickle and placed him in ambush. When Ouranos met with Gaia, Cronus attacked him with the sickle, castrating him and casting his testicles into the sea. From the blood that spilled out from Ouranos and fell upon the earth, the Gigantes, Erinyes, and Meliae were produced. The testicles produced a white foam from which the goddess Aphrodite emerged. For this, Ouranos threatened vengeance for overstepping their boundaries and daring to commit such an act. Ouranos had also cursed Cronus, stating that his child would come to overthrow him, just as he had done to him.

The Binding of Cronus

In some versions of the myth it is Hyperion, along with Cronus, Iapetus, Krios, and Koios who together revolt against their father. When Ouranos descended to the earth to lay with Gaia, Hyperion along with Krios, Iapetos and Koios waited at the corners of the world and grabbed him as he came down. Kronos then was able to castrate his father with a sickle made by their mother.

King of the Titans

After dispatching Ouranos, Cronus re-imprisoned the Hecatonchires, and the Cyclopes and set the dragon Campe to guard them. He and his sister Rhea took the throne of the world as king and queen. The period in which Cronus ruled was called the Golden Age, as the people of the time had no need for laws or rules; everyone did the right thing, and immorality was absent.

However, when he married and bore children with Rhea, he learned from Gaia that he was destined to one day be overthrown by his own children. Since Cronus feared that one of his children would be his downfall, as he was that of his father before him, he decided that whenever one of his children was born, he would swallow it. This led him to swallowing his first five children: Hestia, Demeter, Hera, Hades and Poseidon which gave him the title of The Crooked One and King Cannibal.

Rhea could not stand another one of her children to be devoured until she was informed by Gaia to hide her final child (Zeus) in a cave, and replace him with a stone. Cronus blindly swallowed the stone, but gave him a painful stomach ache.

As the story goes, Zeus grows up, and together with Metis, plots against his father by spiking his drink which in turn caused Cronus to regurgitate his imprisoned children and Zeus freeing his older siblings. Zeus then frees the Cyclopes and Hecatonchires from Tartarus, gets aid from one of the Titans named Themis and her son Prometheus, and engages Cronus and the the rest of the Titans in the Titanomachy for ten years. Zeus defeats Cronus with a lightning bolt made by the Cyclopes as a show of gratitude. Zeus takes his Bronze Scythe and literally chops his father to pieces before casting them with the other Titans to Tartarus.

As a Titan, Cronus is unimaginably powerful, with Zeus requiring the creation and aid of the Master Bolt from the Elder Cyclopes as well as the Hekatonkheir in order to defeat Cronus. Another testament to Cronus' power was when he was able to survive several blows from Thor's hammer Mjölnir, a weapon that is said to be capable of bringing down almost anything with a single strike, and contend with the mighty Æsir god. 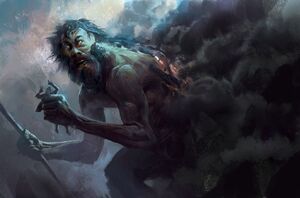 Cronus' escape from Tartarus and exacting his revenge on Zeus.
Community content is available under CC-BY-SA unless otherwise noted.
Advertisement