The Demonic Paradise Wiki
Register
Don't have an account?
Sign In
Advertisement
in: Spirit, Beings, Mythology,
and 3 more

The Church Grim, also known as Kirk Grim, Kyrkogrim (Swedish) or Kirkonväki (Finnish) is a figure from English and Scandinavian folklore, said to be an attendant spirit, overseeing the welfare of its particular church. English church grims are said to enjoy loudly ringing the bells. They may appear as black dogs (even as other animals, such as rams, horses, roosters or ravens) or as small, misshapen, dark-skinned people.

The Swedish church grim are said to be the spirits of animals sacrificed by early Christians at the building of a new church. In parts of Europe, including Britain and Scandinavia, it was believed that the first man buried in a new churchyard had to guard it against the Devil. To save a human soul from the duty, a completely black dog would be buried alive on the north side of the churchyard, creating a guardian spirit, the church grim, to protect the church. In Swedish tradition, a person attempting the Årsgång, or year walk, a divination ritual that involved circling a churchyard on New Year's Eve, would have to contend with the church grim, which was the natural enemy of the year walker.

The Scandinavian and Nordic church grim or Kirkonväki can also occasionally appear as pale-skinned 'ghosts', said to be the spirits of the folk who lived in the proximity of the church that they now 'guard'. It is said that the first founders of Christian churches would bury a lamb ("church-lamb") under the altar. When a person enters the church when services are not being held, he may see the lamb, and if it appears in the graveyard (especially to the gravedigger) then it portends the death of a child. In some tellings, the lamb is said to have only three legs. The lamb is meant to represent Christ (the Lamb of God) as the sacred cornerstone of the church, imparting security and longevity to the physical edifice and congregation. 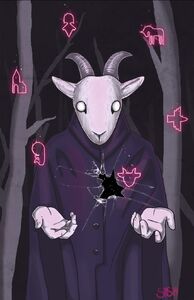 The church grim in the form of a lamb
Community content is available under CC-BY-SA unless otherwise noted.
Advertisement