Witches and other Humans

Belphegor is the Demon Lord that presides over the sin of Sloth and one of the Seven Princes of Hell that rules Hell and helps people to make discoveries.

Belphegor gives people ideas for inventions that will make them rich and thus greedy and selfish. He seduces people by suggesting to them ingenious inventions that will make them rich. Belphegor is a lieutenant from Hell, who had been dispatched to Earth on a mission by Satan. In doing so, he found a particular affinity for Paris, France. His name is a corruption of Baal-Peor, the name for the god of the Moabites.

As one of the fallen angels, Belphegor was originally a member of the order of Principalities, and after his fall he became a demonic counterpart to one of the ten Sephiroth that oversee the Tree of Life.

He is the Biblical enemy of the 6th Sephiroth, the patron angel of beauty. As the Patron demon of dispute, perhaps their adversarial relationship exists because beauty should never be disputed, as it is in the eye of the beholder and some can find the beauty in everything. If Belphegor were to become too influential in the world, then the beauty of it all would become tainted, causing ruination.

According to De Plancy's Dictionnaire Infernal, he was Hell's ambassador to France. Consequently, his adversary is St Mary Magdalene, one of the patron saints of France.

Belphegor is invoked by mortals who wish to find fame and wealth through invention, often with as little effort as possible. These wishes, as with almost any demonic invocation, are doomed to fail, because Belphegor’s true mission is to draw the lazy into the sin of Sloth. Through the failure of whatever Belphegor provided to the invoker, he draws them into procrastination and idle dreaming rather than producing, thus damning them.

He is a shapeshifter, delighting in using this ability to deceive mortals. His most common forms are polarized in their appearances. He will take the form of a beautiful woman, naked in all her glory, to seduce those who would fall for his wiles. He also appears as a monstrous demon, with leathery flesh, huge horns, long sharp teeth and fingernails, and a gaping mouth.

Belphegor was once a member of the order of Principalities. During his time in Heaven, Belphegor was a friend of a fellow principality, an Angel of the forests, though during a conflict in the war in Heaven, demon lord Merihem had killed which even now Belphegor has not forgiven.

After her death, Belphegor experienced the five stages of grief until he had accepted it and started to fall into the sin of Sloth. Unlike the majority of rebel angels, Belphegor did not join Lucifer's side after he declared war against Heaven nor did was he at God's side, either. Despite not being part of Lucifer's rebellion, the fact that he did not join God's side either earned him his Father's punishment of being cast down to Hell alongside all other rebel-angels, no longer an angel of God but an Archdemon of Sloth. Belphegor, along with Lilith, Mammon, and Beelzebub, had started looking for Lucifer after he fell. After that, they had taken over Hell and made every demon kneel to them, including Merihem which Belphegor enjoyed seeing.

He was then present at Pandemonium during Lucifer's Rally. Belphegor had then became a member of the newest Seven Princes of Hell joined with Beelzebub, Mammon, Asmodeus, Leviathan, Satan and Lucifer.

During this, the pagan god Baal Peor who ruled over the Moabites as their patron. After Baal Peor was killed by the Archangel Merkabah, his essence and soul had joined with Belphegor to be united as one.

During Exodus, as Baal Peor, some factions of Israelites started making sacrifices to Belphegor. The reason for this is because they began having relations with the women of Moab, who seduced them to their local god. Regardless of the reason, these sacrifices enraged Moses so much that he began to condemn those who were worshiping Belphegor to death. By the time the sacrifices to Belphegor were eliminated, 24,000 people had been killed. The only thing disputed in this was whether they were actually slain, or whether Moses called down a plague upon them that caused their deaths.

Belphegor was sent from Hell by Pluto and Satan to find out if there really was such a thing on Earth as married happiness. Rumor of such had reached the demons but they knew that people were not designed to live in harmony. Belphegor's experiences in the world soon convinced him that the rumor was groundless.

As a demon, he is described in Kabbalistic writings as the "disputer", an enemy of the sixth Sephiroth "beauty". When summoned, he can grant riches, the power of discovery and ingenious invention. His role as a demon was to sow discord among men and seduce them to evil through the apportionment of wealth.

According to some 16th century demonologists, his power is stronger in April. Bishop and Witch-hunter Peter Binsfeld believed that Belphegor tempts by means of laziness. Also, according to Peter Binsfeld's Binsfeld's Classification of Demons, Belphegor is the chief demon of one of the Seven Deadly Sins known as Sloth in Christian tradition.

Some rabbis claim that he must be worshipped on a toilet, with offerings being the residue of ones' digestion. This has led some to conclude that Belphegor is the god Pet (Fart) or "Crepitus," while others believe that he is Praipus. Selden is cited by Bainier as reporting that human victims are to be offered to him, and that his priests partake of the flesh. Wierus wrote that he always has an open mouth, attributing it to the name Phegor, which according to Leloyer means "crevice" or "split," and refers to when he was worshipped in caves and people threw him offerings through an air hole. 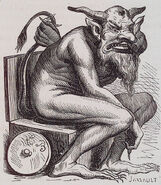 Add a photo to this gallery
Retrieved from "https://the-demonic-paradise.fandom.com/wiki/Belphegor?oldid=32064"
Community content is available under CC-BY-SA unless otherwise noted.